The final, final edition of 'Christmas stocking prototype #1'. I am so happy with the outcome. Several things learned along the way. 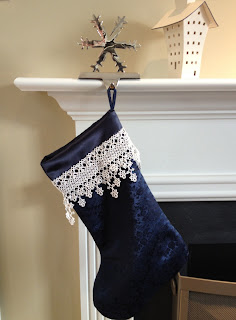 Here is a picture with a shuttle for perspective. 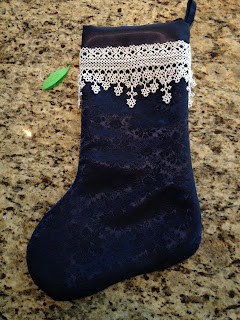 The question of the day....will I continue obsessing over Christmas stockings? Or, is there another project calling my name?

I'm sure you've been wondering about our twelve step program......I'm ignoring the entire idea of tatting addiction. But, will need to remind myself sometime in the near future to breathe....oh, wait! That's what this addiction is all about. Breathe in, breathe out...tat!

Have a wonderful day!
John
Posted by John at 7:38 AM 16 comments: Links to this post

Greetings to you all!

Here is the final decision regarding the placement of the lace on the first stocking. 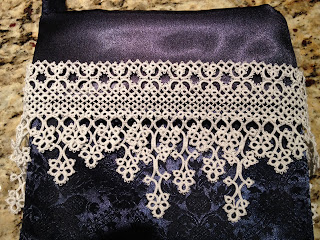 After all your wonderful comments and suggestions I started to fiddle with the lace on the stocking. Then, I realized you all were right. Some said, 'the top of the stocking' while others said, 'dangling from the lower edge'. Well, how about splitting the difference?

It made all the difference...at least in my humble opinion.

I blocked the lace. It was quite interesting trying to figure out how to block both sides. So, here was my process. 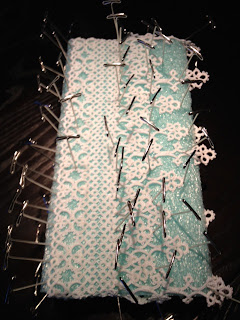 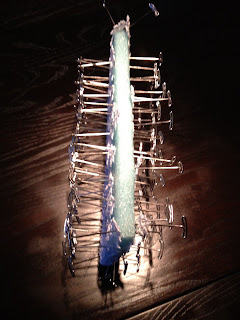 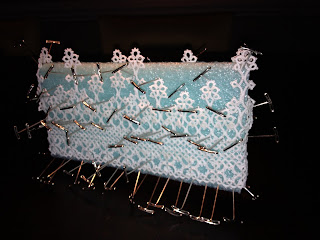 And now for some 'artsy' pics 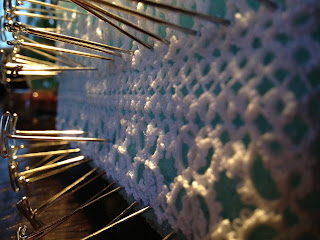 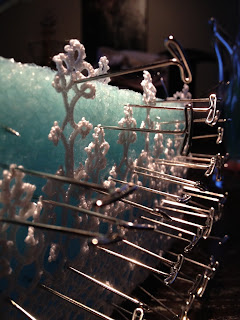 As you see, I don't pin every picot. That's a bit too tedious for me.

I have begun to attach the lace and will be done some time this evening. I'll then take pics and let you see the final project. And Finally, You will be spared of my endless drivel about the 'Christmas stocking'.

I hope you all have a wonderful day!!
john

Greetings to you all!

Yesterday was spent trying to 'perfect' the Christmas stocking. By that, I'm referring to the actual stocking. I figured out how to keep the top seam from puckering and now have two sizes. I'll show the two in just a bit.

Your comments are all VERY useful. I see that I'm going to have to do a series of stockings. I think you all are right...(if there is a right and wrong to this). I've not...well, let me show you.

Below are the two smaller stockings with the tatting on the very top and one with it hanging from the 'flipped out' edge. 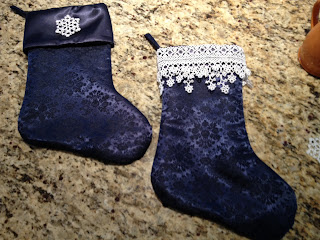 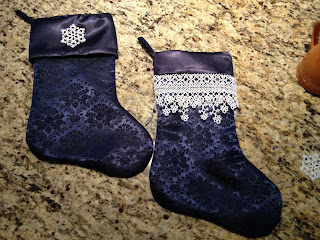 Both are pleasing on some level.

The snowflake is not a 'must have'. It's another possibility.

Now, here is the third, larger stocking. I'm actually really pleased with the outcome of the stocking. One little change for the future...I'll shorted the 'flipped out' satin lining by 1/2 inch. 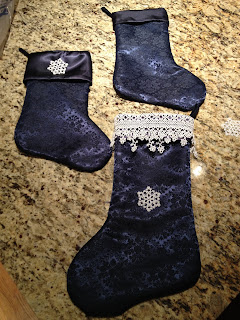 The angle of the photo is a bit odd...making the toe look a bit wonky. None to worry, I don't think it looks that way in person.

So, as you see, I'm on my way and have my very own projects for future gifting.

Have a great day!!
john

Sorry for the extended absence! I've been a bit busy lately enjoying the break between semesters. A Happy New Year to you all!!

If I recall....we left off with Step Two of the twelve steps for addicted tatters.

Well, step three is just going to have to wait for a bit longer. I'm ignoring my addiction at this moment and just trying to figure a few things out.

My absence was due to a secret project. I wanted to complete the first demo before blogging about it...however, I need opinions from my tatting peeps. So, here is the project.

I started tatting an edge over the Thanksgiving break. I wanted to do something that looked like icicles for the top edge of a Christmas stocking. So, here was the beginning. 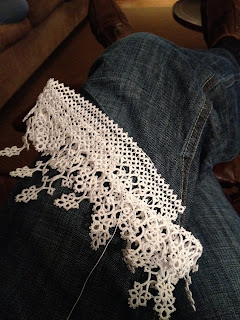 I didn't really know what pattern I'd use for the stocking. I just tatted with the idea in mind. I found a pattern and just finished the final sewn stocking this evening. It's a demo... 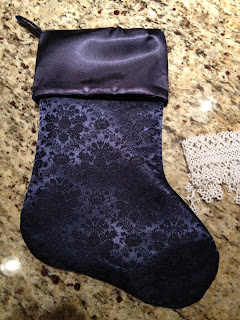 Here are some close-ups of the tatting. And, NO, it's not attached. The tatting is a bit too big for this stocking. I'll have to enlarge the pattern for this piece of tatted edge. There are several patterns used in the edge. One was adapted from the blomqist book. I added length a clover leaf for the longer icicles. I also added a short motif between each longer icicle. The top of the edge is from Austin's 'A New Twist on Tatting'. 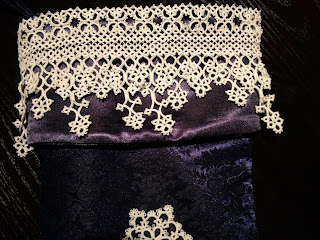 The snowflake is from Jan Stawasz's 'Tatting: Theory and Patterns' 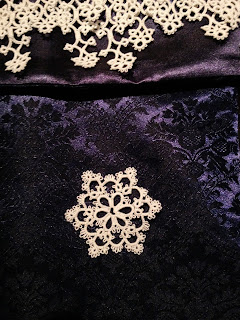 Now, I've got to figure out how I'm going to attach the edging..


Do I attach it to the top of the stocking? 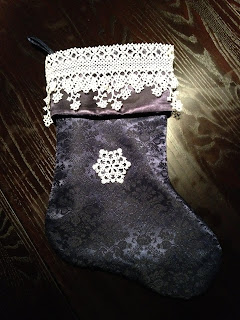 Do I shorten the turned out lining and attach it on that edge? 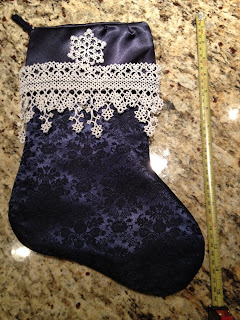 This may not be too clear...not sure. Let me know what ya'll think.

BTW...I missed ya'll and hope to be checking in more frequently.

Have a wonderful day!!
john