Well,
The pattern I'm working on calls for the next round to consist of twenty some motifs based on a four ring pattern....close, tie, and cut. I've chosen to use two shuttles and work with split rings and a mock picot to 'jump' to the next motif. You can see it here. 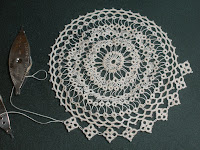 Look close and you'll see the mess...don't zoom in and maybe it'll look o.k. There is another round of these motifs later in the pattern..so, I've got practice ahead of me.

Also, I counted the picots in the previous round...guess what...not enough. WHAT?!!! How could that possibly be? I counted and counted and then looked close at the pattern....SHE fudged it!!...so, my perfectionist self must be content with the same.